Viral conjunctivitis causes an inflammation of the conjunctiva which is the lining membrane covering the white part of the eye and the inner surface of the eyelids. The disease varies from a mild inflammation and discharge through to more severe inflammation, which may affect vision. Typically this highly contagious disease starts with a mild sore throat, followed by varying degrees of a predominantly watery discharge with redness and lid swelling. Often there is some tenderness in front of the ear (pre-auricular adenopathy) due to an inflamed lymph gland. Typically both eyes are involved.

Minor epidemics of this infection occur in the community; like the common cold. The incubation period is between 4 – 10 days. Spread is by droplets from coughing, or by direct touch of the secretions. Care should be taken to avoid sharing pillowcases, towels and flannels. Taps should be rinsed after use and hand cleaning with alcohol gels encouraged. The infection is contagious for 10-14 days, which is generally as long as there is discharge. 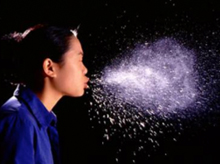 Usually this infection does not affect vision, however in some cases patchy spots of inflammation and scarring affect the cornea, which is the clear window at the front of the eye. You will be aware of a change in vision with haze and haloes. This is often treated with steroid drops, however your ophthalmologist should supervise this. Generally the spots disappear over a period of months.

There is no anti-viral drop which is effective against the adenovirus, so the infection has to take its course. Generally an antibiotic drop such as chloramphenicol is prescribed to help prevent secondary bacterial infection. These contain a lubricant, which helps with the discomfort.

Sometimes, when the infection is severe, or vision is affected, your ophthalmologist will prescribe steroid drops to help settle the inflammation. This must be supervised, as long-term use of steroids can be problematic.

Generally it is advisable to stay away from work colleagues due to the risk of transmission. 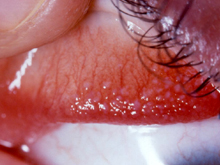 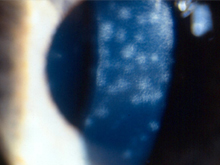 There are characteristic follicles seen beneath the lid.  Temporary scarring may
lead to blurring. Steroids may be required.