Anterior uveitis is an inflammation, which affects the front chamber of the eye.  Inflammation is the result of activation of the immune system – autoimmune reaction – meaning that the immune system is directed against tissues and cells in the eye.
Generally attacks are isolated and do not recur.  In most cases there is no associated condition, however in a number of cases there are associations.  These are, in order of frequency:

Uveitis may also be caused by blunt eye trauma, viral eye infections such as herpes zoster, herpes simplex and others.  Intraocular surgery may trigger uveitis post operatively.  See under cataract. 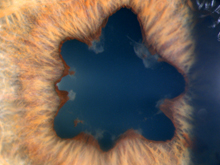 Keratic precipitates (KP) may form on the inner surface of the cornea. On the right you can see that the front chamber is cloudy and a hypopyon (pus) has formed in the front chamber. Vision will be poor until this has dissolved away with steroids.

Intensive steroid drops are administered – up to half hourly in the first instance.
You will be given a plan to reduce the drops over several weeks, once things are under control. It is never possible to stop the drops abruptly as soon as things feel better, since the inflammation will recur.

Dilating drops – these reduce the photophobia and break down the adhesions between the pupil and the lens.

Other forms of uveitis

There are chronic (longer lasting, grumbling and recurrent) forms of uveitis.

Inflammation can occur in other parts of the eye:

These other (often more serious) forms are also associated with other systemic or general body conditions such as:
Rheumatoid arthritis, Lyme’s disease, tuberculosis, Behcet’s disease, toxoplasma infection, syphilis and many others. The scope and variety of these conditions is too great to provide any detail here. If you have a chronic inflammation, which is not typical, you will require investigations to identify potential causes. Treatment can then be better directed.

There are many rarer types of uveitis which are beyond the scope of discussion here, but more details can obtained from the following link: